Sometimes, when a building is closed and secure and the installation of the Mechanical Electrical and Plumbing (MEP) is done, the building inspector finds damage to the floor joists and red tags the job.

Nobody wants to delay a job. In a case like this, an ounce of prevention is worth a pound of cure. The key is communication between the trades.

Let’s take a common example where a Plumber has cut into the top chord of a joist to make room for the passage of a toilet waste pipe. Firstly, if the Framer has plans detailed enough to see where the toilet is going to end up; he should be planning to allow for the cut, by sistering the joist. But let’s say the plans weren’t detailed enough and the problem got discovered only as the Plumber was installing that section. Before cutting, the plumber can speak to the Framer about remedying the situation, or at least to the general contractor. Can he move the toilet?

It’s the general contractor’s responsibility to make sure the problem is solved before the scheduled inspection. Hopefully, before the inspector pays a surprise visit. If jobsite communication is good, the problem can be solved quite easily without impacting the schedule.

That was an example of a typical type of damage, but there are other types as well. We’ve seen Bottom chord damage caused by forklifts on the site as well as broken joist finger joints caused by someone using the Open-joist Triforce® as a scaffold.

In the case of Open-joist Triforce® we’ve engineered simple repair details for most of the damage situations that we’ve encountered on site.

The repairs below are simple to execute, requiring either 2 x 4 or plywood sheets, screws and glue. Here’s one for the example I just gave. 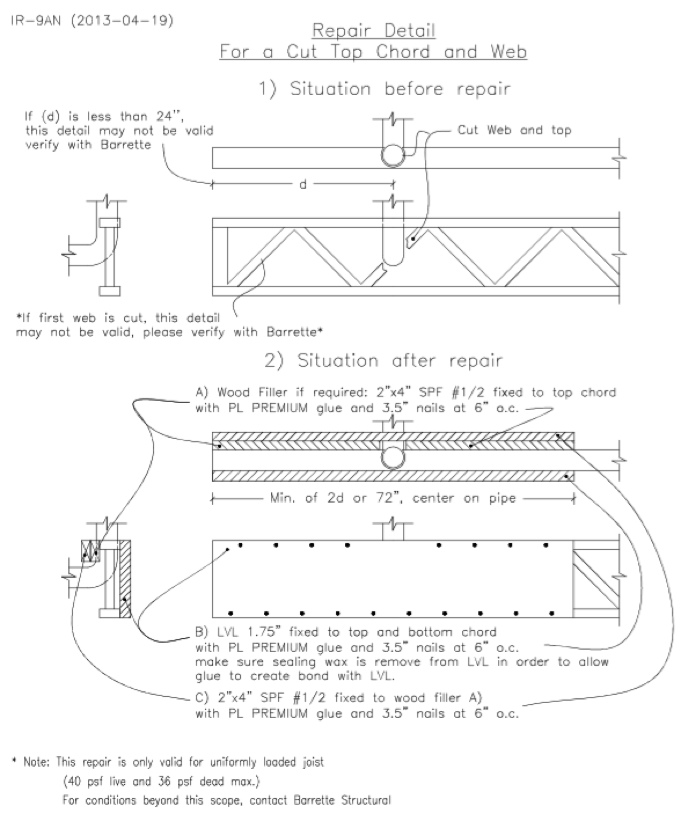 If a TRIFORCE joist gets damaged on your worksite, contact us. We’ll be happy to provide you with the appropriate simple repair detail for an immediate solution.

But remember, an ounce of prevention…

View all posts by: AdminUser